Post the good things and the bad things that have happened to you on Neopets here.
Locked
996 posts

Achievement 1: I decided to take part in the NC Mall Stocking Stufftacular and hang a few stockings - so far, I've been pretty pleased with the bits I've received. But today... oh God, the background we got is just amazingly adorable. Combined the Halloween Candy Shower, it's even better. LOVE IT

Achievement 2: I finally parted with a chunk of my NP and bought a Kelpbeards Trident for 8.9mil. I also morphed Sunburn into a Pteri, painted him Christmas and have started training him. His stats are all messed up from the lab but I'm glad I've finally gotten round to training him properly!
Neopets ~ tumblr
Top

Alice: Awww, that's so cute! I've been watching this in my browser window on and off for the past 7 hours. "Whee! It's a field of candy!" *prances* I wish you could submit it in customization spotlight and see the rainshower.

It's pretty crummy, isn't it?

I almost want to use one of those non-tradable starter paintbrushes on it just so I can actually see my Zafara again.
Top

Heh I find invisible interesting for a day or two, than I start missing seeing my pet and reach for the Turnip Tonic (changes your pet into one of four basic colours - costs around 20k).

I'll leave him as is for now. For now I have a picture of King Altador instead

(the action figure wearable, with an altadoran background.) I still have a rainbow faerie quest to use xD.

Oh man! I've had a string of good luck recently! ^_^ (Oddly enough it came after a major FC upset...)

After losing 60K on a day I knew not to bet, I had 50K in my till minutes after I found out I lost. Then I won 10K and a water muffin 5 minutes later. Next I got a premium SHH zombie book worth 89K that sold in a few hours. And to top it off, someone bought my Shenkuu Game Board BG for the full TP asking price that same day for 200K. I broke 1.1m again

Today I bought 2 New Years Capsules so I could try and get something for a trade. I didn't get the BG I needed for the trade, but the second capsule I opened knocked off 3 items on my wishlist, 2 of them are backgrounds.

Aneix is wearing one of them. The prettiest NC BG I've ever seen! Xsceena is wearing the other BG.

Usul that's some incredible luck there! I opened 13 of those and got bunch of old doubles and not a single LE background. I have absolutely no luck when it comes to capsules.

I managed to get the Expellibox 150NC and now Xanler has a much prettier bg than the canadian burger king one! 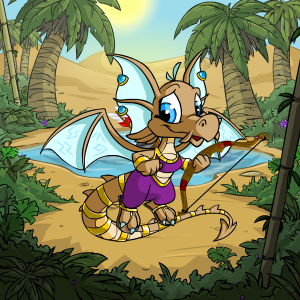 I wish such pretty BGs were available with np

. It's way depressing how many nice wearables are in the NC Mall. Though I'm tempted to do some shopping on my sides, haha

Finally, it's December 31!
That means I've completed my "Every day in 2009 lab ray log" for Umita:
http://www.neopets.com/~Umita

I'm so glad that I can just zap as I please now. LOL
Top

I finished my brand new Disco Pet Directory and have it all posted up for the new year!

Haha, something hilarious happened on the neoboards just now.

Someone posted saying that they'd been offered a WN Glowing Draik on a pet named "Aleck", which is a real word as in "Smart Aleck".

I and another neopian posted to the effect of saying the draik's owner is getting ripped off because "Aleck" is a mispelling, not a RW.

I got this neomail from Aleck's owner:


We're both adults. What you said was extremely mean and I think you owe me an apology for falsely flaming me on my thread. If you had taken the time to search the word "smart aleck" you would find many (highly accredited) sites that attest to the fact that Alec has two spellings. In fact, Alec is more commonly a name.

I hope we can be civil about this, after all, as I said earlier, we're adults.

As long as the person trading their draik is aware of this, then they're not being ripped off.

If you haven't told them this, you might want to in the spirit of honesty.

*shrug* You asked for our opinions on your thread, we gave 'em. I'm sorry you were offended by what I said, but I'm not sorry for saying it.


I explained it every time I advertised Aleck, as a matter of fact.

I did not ask to be flamed or have some 'know-it-all' pseudo-intellectual try to grow their head a little bigger. I asked one thing, and one thing only..
Should I accept, reject, or can someone beat it?

I don't remember asking for a flame-party.

And who made you the trade authority to begin with?

I'd love to meet a person like you face to face and see if you could do something similar. People can be so very mean when they know they don't have to look a human being in the eye.


Seriously dude, chill out a bit. This is neopets, it's not the end of the world if someone disagrees with you here or anywhere else for that matter.

I posted one response (two if you counted me posting I agreed with that other guy). That's not flaming by any stretch.

Chill out, seriously. Face to face, I'd say the same thing. Would you scold me like this face to face?

But they blocked me from neomailing them, sigh, so I never sent it to them.

I'd do it from a side but that would be harrassment, and I'm above that

It's mispelled. No matter what they say. Those people with typoed RNs are just making people with geniune RN have a harder time trading.


A friend of mine is struggling to get what he wants for his french RN Baby, because the RN is well, french and in capslock.

I'm almost done with my transfers, as I got my Robot Krawk on my account via transfer today. One more month 'till I can move one of my Draiks on my main.

It's been a very good day. I transferred Orikita to my main so I could get her Mazzew avatar. I detached it, painted her new turtum maraquan, and I got one of the 16 vernax to hop on in less than 40 seconds.

Analahse has found a permanant home to me. I didn't want to say anything a couple days ago because the trade might be backed out on. But I am officially done with trading, and doubled my NP in about a week. ^_^

Edit: Scratch that. Oh no! Boochi fires his ray gun and turns Saklawi into a Baby Peophin!!!
*sigh* well, at least I have his clothes on the right account. *facepalm* Fjorab gave him to me!

Today is my 7th anniversary on Neopets!
First account, which I now use as a side account: http://www.neopets.com/userlookup.phtml?user=glamgirl03

On another note, that account's lab rat got zapped into a Tomato Chia yesterday!
I retired her from the lab and moved her to a different side account.
She was my Red Hissi that I created over 3 years ago and began zapping once I got the lab on that side.
I surfed the pound for another long-term lab rat and found a Blue Shoyru named Gloxiah.
She was starving, had Itchy Scratchies, and an unnamed petpet.
I fixed all of that and now she's ready for zapping!
Top
Locked
996 posts

Return to “Achievements and Tales of Woe”

Users browsing this forum: No registered users and 1 guest